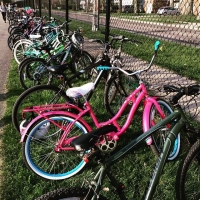 Students' bicycles lined up at Rocky River Middle School during the first day of the Bike To School Challenge in 2015.

Students carry a "Ride Card" that is stamped each day they ride a bike to school. When they accumulate four bicycle rides to school, students receive a free t-shirt from the main Bike To School Challenge sponsor and organizer, Century Cycles of Rocky River. The more students bike, the more they can win – every Ride Card they fill up earns them more entries into a grand prize raffle that includes two new bicycles per school from Raleigh Bicycles. Safety is also rewarded: Students earn twice as many entries if they wear a bicycle helmet.

Overall in 2015, students in the Rocky River Bike To School Challenge pedaled over 25,000 miles during the three-week program, saving their parents over $2,700 in gasoline, and burned over 650,000 calories, the equivalent of over 3,600 cans of Coca-Cola.

Kevin Madzia is the Information Technology Manager and a Bicycle Fit Specialist for Century Cycles.