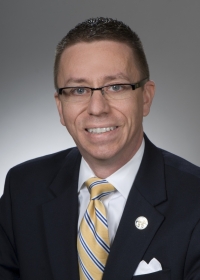 State Representative Mike Dovilla (R-Berea) has announced his candidacy to serve as state senator for the 24th Ohio Senate District, comprised of 28 suburban communities in Cuyahoga County, during the 132nd General Assembly.

“For nearly five years, I have been honored to serve the people of Cuyahoga County in the Legislature,” said Dovilla.  “Throughout the summer numerous community leaders and constituents have asked if I would consider continuing to work on their behalf by seeking our district’s Senate seat.  I am humbled by their strong support and enter this race with great confidence that we will earn that opportunity.”

Rep. Dovilla, a lifelong Republican and the House Majority Whip, is currently serving his third term in the Ohio House of Representatives.  As a state legislator who has authored more than a dozen laws, he possesses a wealth of policy experience and a proven record of results as a public servant.  Dovilla has previously served as a presidential appointee at the U.S. Office of Personnel Management, a senior advisor to U.S. Senator George V. Voinovich, and a Presidential Management Fellow at the U.S. Department of State.

In addition, Dovilla has a distinguished military career and is an officer in the Reserve Component of the U.S. Navy.  A lieutenant commander with more than 13 years of commissioned service, he served on active duty on a 12-month deployment in Iraq in 2007-2008.  He currently serves as a department head with a unit supporting U.S. European Command.

“My top five priorities in the Legislature remain those on which I first ran for office in 2010, areas where we continue to make measurable progress,” said Dovilla.  “If given the opportunity to continue my public service in the Ohio Senate, I will stay focused on strengthening our state’s business-friendly environment for job creation, promoting strong public education, protecting our senior citizens, advocating for veterans, and reforming state government.”

In the current legislative session, Rep. Dovilla is sponsoring several additional pieces of common sense legislation, including the following measures: