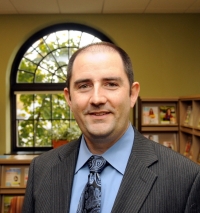 The Rocky River Public Library Board of Trustees recently announced that Jamie L. Mason is the new director of the library. “I am very pleased to announce that the Board of Trustees appointed Jamie Mason as director,” said Rocky River Public Library Board President Audra Bednarski. "We have great confidence in Jamie's leadership skills, his vision for the library, and his concern for our staff,” she said.

“I am excited to have the opportunity to lead Rocky River Public Library into the future,” said Mason.  “I have adored the library and its staff since coming here in 2009.  There are many exciting things ahead for this community and the library. It’s a great place to work!”, said Mason.

Mason earned his MLIS from Kent State University.  He serves on the board of the Ohio Public Library Information Network and was its president in 2012.  Mason has also served on numerous committees with the Ohio Library Council.  He is married to Erin, a teacher at Murray Ridge School in Lorain County, and has three children.