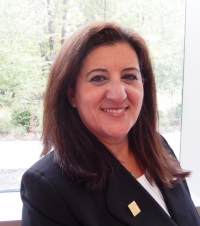 Rocky River resident Mireille “Miro” Tabanji — the 2014-2015 Board Student Scholar at Cuyahoga Community College (Tri-C®) — can tell you all about perseverance.

In 1980, when Tabanji was 18, she fled war-torn Lebanon with her family and took refuge in Jordan. She left her homeland without graduating from high school, as the fighting often forced her to abandon class.

In 1980, when Tabanji was 18, she fled war-torn Lebanon with her family and took refuge in Jordan. She left her homeland without graduating from high school, as the fighting often forced her to abandon class.

“I have big dreams I want to accomplish,” said Tabanji. Don’t bet against her.

When her family moved to the United States in 1985, Tabanji was determined to learn English and earn her high school diploma. She quickly reached those milestones and set her sights on college and higher education.

Life provided a few detours, though. She met the love of her life, Tony, married and had her first son, Anthony. She had a second son, Nathan, and took college classes intermittently while raising her family.

In 2005, Tabanji and her husband opened a fitness center, which they successfully ran for three years. After selling the business, she decided to focus on her college education.  “It was time for me to do something for myself,” Tabanji said of her decision to go to Tri-C.

She began with the Career Exploration class at Tri-C’s Corporate College West in Westlake and learned a lot about herself. Tabanji also became actively involved with Student Life programs at the College.

“I like to be involved on campus and love helping people,” Tabanji said. “But most of all, I love to challenge myself and learn more.”

A tribute to her hard work and dedication, Tabanji was named Tri-C’s Board Student Scholar for the 2014-2015 academic year. She was sworn into the post at last month’s meeting of the Cuyahoga County Board of Trustees. In her new role, Tabanji is responsible for meeting with student government leaders on all four campuses and bringing any of their concerns or issues to the board. She meets monthly with student and college leaders in preparation for her board presentation.

“Being selected as the Board Student Scholar is an amazing honor and challenge that I am excited for,” Tabanji said.

Her goal is to complete her associate degree within the next year and transfer to a four-year school to pursue a bachelor’s degree in communications and Middle Eastern studies.