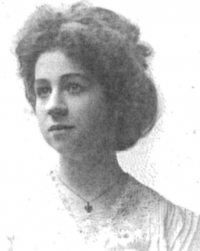 On October 3, the 100th Anniversary of the 1914 Suffrage March in downtown Cleveland, Gloria Cipri-Kemer and the Emerald Necklace Inn will host a gala afternoon tea in celebration of this event and in remembrance of suffragist legend Josephine Saxer Irwin who as a young woman was in the parade.

At 11:30 a.m. at the Fairview Gemini Center, luncheon guests will be greeted with suffrage songs, banners and "Women in History" members portraying suffrage leaders.  Laura Loew, from "Lost in the Past", will then present an overview of Woman Suffrage, the 72-year struggle to win the vote for the women of the United States.

One way that suffrage organizations drew attention to their cause was mass demonstrations and marches. In Cleveland, 7,000 women marched as 200,000 spectators watched on October 3, 1914.  The marchers came from all walks of life - young mothers, matrons, factory workers, teachers and clerks.  They dressed in white and wore yellow roses on their shoulders as they held banners that read "Votes for Women".

One of the five women escorts riding roan horses at the head of the parade and sporting flaming red hair was 24-year-old Josephine Saxer, who at the time was a Lakewood resident and teacher.  It is for this act of courage and her continued advocacy for women's rights and world peace that she is being honored.  Roberta Sunkle, who personally knew Josephine in her later years, will highlight her life through a series of pictures obtained from the Western Reserve and Fairview Park Historical Societies.  This will be followed by Charlene Connors, a Women in History member, who will present a portrayal of Josephine Saxer Irwin based on extensive research and interviews with family members and friends.

The luncheon will end with Fairview Park Mayor, the Honorable Eileen Patton, introducing Josephine's family, friends and other VIP guests that have continued her legacy of service to the community.  She will also issue a Proclamation honoring the life and accomplishments of Josephine Saxer Irwin, a long-time Fairview Park resident.

The celebration of Josephine's life will continue on Saturday, October 4, from noon until 3 p.m. with a gathering at her home on River Cliff.  Josephine and her husband John raised beautiful orchids, including the aptly named Josephine Irwin white orchid registered in England.  Karen Kilbane, the present owner of the Irwin home, has graciously agreed to open the greenhouse to visitors.  Edgar Stehli, orchid expert, will be present to exhibit and sell a variety of orchids as well as answer questions about cultivating them.

The day will also include a self-guided tour of the Fairview Park (Rockport) Cemetery developed specifically for this event by Sharon Guinaugh, author of "Come Walk with Me, Exploring Fairview Park-Rockport Cemetery".  The tour focuses on six specific gravesites, including that of Josephine Saxer Irwin.  During her lifetime, Josephine fought to preserve the cemetery and even chose the large boulder to hold the plaque she designed, which was dedicated in 1975.

Consequently, all money received after expenses will be donated to a cemetery fund to be used for continued upkeep and also future replacement of the entry gates.  In Josephine's honor, Gloria Cipri-Kemer and the City of Fairview Park have already donated the Weeping Cherry Blossom Trees that line the walkway of the cemetery.

The cost of these events is $30 for the luncheon only, $35 for the luncheon and the Saturday tours, and $15 for the tours alone.  For more information and reservations, call 440-333-9100 or email stay@emeraldnecklaceinn.com.

Charlene Connors is a member of Women in History and portrays 14 historical American women. Gloria Cipri-Kemer also contributed to this article.