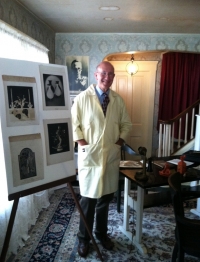 By all measures, the open house in August at the original Rocky River site of the Cowan Pottery Studio was a success.  The restored Cowan display room gleamed with original pieces - from high-end, sculptured limited editions to open-stock consumer items. Both the pieces and the color array of the glazes, some of which have never been replicated, gave testimony to the expertise of Cowan's staff.

In the 1920s, the showroom drew buyers from such stores as Marshall Field in Chicago, Wanamaker's in Philadephia and Halle's in downtown Cleveland. Buyers selected the pieces as well as the glazes that they wanted for their stores.

Among the crowd of admirers of Cowan's work, one particular gentlemen beamed with pride. He was Bill Cowan, the grandson of founder and artist R. Guy Cowan. Mr. Cowan is an attorney and resides in Naperville, Illinois. He reluctantly admits to having no artistic talent.