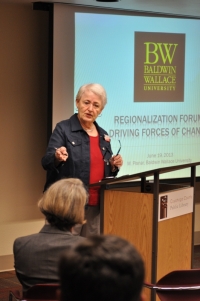 The Rockport Observer welcomes discussions about issues that have an impact on our community in our Forum section.  One such subject is the idea of merging westside fire departments.  This has been covered by our sister paper Westlake/Bay Village Observer since April of 2012, and we are pleased to now join in the discussion.

This piece is from a League of Women Voters forum called "Regionalism:  What is it? -- Evaluating Proposed Fire District Mergers."

We are publishing notes from the most recent meeting, which was hosted at the Fairview Park Library, and facilitated by Janice Patterson of the Westlake-North Olmsted Chapter, League of Women Voters-Cuyahoga Area.  Articles submitted by Conda Boyd of the Bay Village Chapter.

What do you think readers?  Is this a good idea?  Why or why not?  Become a member of The Rockport Observer and create a discussion with your neighbors.  Go to http://www.therockportobserver.com/, find Member Center in the left hand menu, sign up and submit your opinion. The Rockport Observer is a completely community written paper; you will be reading your opinion and maybe some of your neighbors' in the next issue, in print and online.

The take-away message from the June 19 League of Women Voters' forum on regionalization was that fire district mergers are extraordinarily difficult, and citizens should "demand a long-term, strategic vision" for the proposed merger of Bay Village, Fairview Park, Rocky River and Westlake fire departments.

Dr. Mary Pisnar-Sweeney, associate professor at Baldwin Wallace University and co-author of an influential study for a southside fire district merger, stated that this strategic vision, clear benchmarks, a transparent process, public involvement and defined milestones are essential to success. Benchmarks should include concrete measures such as response times, run times, staffing, expenses and training. If the merger is not meeting its benchmarks or milestones, it should stop, and the process of "unknitting the sweater" should begin.

Bernard Becker, Director of the Center for Emergency Preparedness at Cleveland State, agreed. Both citizens and firefighters must understand and buy into the strategic vision. The measures must be tangible, "so everyone will know it when it happens." Specific goals should be set for five and 10 years out. Voters – not just consultants – must be involved because they have the "emotional intelligence" that comes from living in the community now and having to live with the results later.

These two speakers were joined by 59 citizens at Fairview Park Branch Library for a lively discussion. Dr. Pisnar-Sweeney set the stage with background on the forces driving regionalization. Given declining population and an uncompetitive tax structure, municipal revenues are on a downward trend with no end in sight. Cities are looking for ways to save money, including mergers. Yet municipal mergers have a dismal 34 percent success rate. And fire services? Because they are a core service, merging only the fire services is "much tougher to do."

Mr. Becker discussed a STEP process, where Social issues, Technology, Economics and Political concerns must all be addressed in defining a vision and implementing a merger. While mergers are often sold to voters on the basis of cost savings, the reality is that costs always increase. Containing the rate of increase is the best citizens can hope for.

During the question-and-answer period, audience members asked a variety of pointed questions, including why the southside fire district merger failed (political issues), how to ensure an equitable distribution of service (ask the right questions and pay attention to geographical features such as train tracks and creeks that elongate response times), and how to protect the firefighters' employment rights (define the disparities and explicitly address each one).

A recurring theme was elected officials' lack of public engagement. Four Fairview Park council members did attend the forum, as did four candidates for Bay Village city offices, but not one of the four cities' mayors was present. One angry voter was joined by several others in questioning the mayors' proceeding with the fire district after Bay Village voters rejected Charter Amendments that would have eased the merger.

Another audience member asked if fire district mergers are so difficult, are there easier ways to save money. Dr. Pisnar-Sweeney replied that opportunities are often driven by areas of expertise, including finance directors, bond teams and back office functions such as human resource and payroll. Privatization is also an option, particularly for services like streets, garbage and maintenance.

When the forum concluded, the discussion migrated to the entrance, where small groups stood talking long after the library had closed.

This was the final of three forums on regionalism sponsored by the Bay Village, Fairview Park, Lakewood, Rocky River and Westlake-North Olmsted chapters of the League of Women Voters - Cuyahoga Area. In the first forum, county officials discussed how regionalism can offer synergies for both cities and the county. They also talked about circumstances under which regionalization is not appropriate. The second forum featured the Westshore Council of Governments, which has engaged in many diverse, successful cooperative efforts since its founding in 1971.

The League ended the evening by asking the audience for ideas for future forums. We will resume the series in the fall. Meanwhile, if you have ideas, please contact us through our website, www.LWVCuyahogaArea.org.

Regionalism: What is it?

1st Forum: The View from the County Perspective

Summary: Is regionalization good or bad?

Background on the Fire District