Festival Express | Fairview Park and Rocky River celebrate Summer Fest and River Days, along with an additional assortment of activities and events

by The Rockport Community 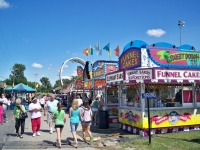 The question often arises: How do you unify two very strong and distinct cities like Fairview Park and Rocky River into some mythical notion of a community called Rockport?

Beginning Friday, various celebrations, activities and events will draw thousands of Rockport residents to either side of Center Ridge - many traversing back and forth - creating an energy and a vibe that makes home-town community pride a tangible experience.

This is the 20 Anniversary of Fairview Park's Family Summer Fest. Held in July, this year from July 13 though 15 at Bohleken Park, it is a full service festival with something for everyone: Hot Air Ballons on the soccer field and rides from Great Expectations, along with a midway and food. This year a Bier Garden was added next to the stage.

Local vendors have always had a chance to show off here, this year's festival featured 45 craft and food booths. The stage features entertainment throughout the whole weekend, and other favorites, like the Annual Dick Nicoloff Memorial Car Show, senior bingo, the PTA Council's homemade spaghetti dinner, and the landing of the Life Flight helicopter round out the events, all culminating in the huge firework show at dusk.

Special thanks to Jeanine Minek, who chairs the Family Summerfest committee, for her help with this information.

The only difficult thing about this weekend, is deciding what you want to first, and where... because meanwhile, down the trail of West 210th, Rocky River celebrates River Days on the same days-- July 14th and 15th. Saturday begins with the Bike Party and Bike Parade down Wagar Road from the High School, ending at City Hall just in time for a Radio Disney performance with lots of audience participation.

The Chocolate Chip Cookie Contest and Taste of River/Buy River will fill the Civic Center. Outside, families will enjoy food, games, inflatables and entertainment – featuring the School of Rock and a concert on the Main stage.

Sunday will celebrate the rich history of Rocky River beginning with the Antique Appraisal Fair and Cowan Pottery Centennial Sale hosted by The Rocky River Public Library. Lolly the Trolley Tours will also be conducted by the Rocky River Historical Society.

The wonderfully successful Memory Lane Antique Car Show will bring visitors to the other side of the City Hall Campus for a walk down memory lane. The day will end with Pie in the Park and a summer concert featuring Rocky River’s own Revolution Pie – a Beatle’s tribute band.

According to Rocky River Mayor, Pam Bobst, "River Days would never happen or be as successful if it were not for the generosity of so many in our community...special thanks to our generous sponsors, energetic volunteers, engaged civic organizations, and talented artists." She goes on to say, "River Days is all about creating and celebrating memories. Whether you remember the parade down Detroit Road and the fireworks at Rocky River Park or if this will be your first River Days, it is our hope is that this year’s events will draw residents – their families, neighbors – to enjoy all the fun-filled weekend has to offer."

In hosting these two events on the same weekend, both cities acknowledge not only their common neighborhoods, but their shared neighborliness. It's a great time to be in Rockport.

Matthew K. Weiland is the founding editor of the Rockport Observer