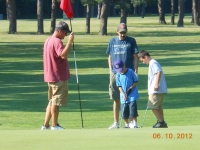 The next generation of champions learn from the best at Mastick Woods.

Maybe it's the confluence of Father's Day with the U.S. Open this weekend, but during a recent visit to Mastick Woods and after seeing a foursome of two fathers and sons putt-out for par at nine, it gradually occurred: There's never been a father/son duo with a championship pedigree in professional golf. No namesakes tearing up the PGA. No dynasties or legacies being passed along from one generation to the next. The pro tour is full of missing links, genealogically speaking.

And it continues to perplex. Professional sports is becoming more and more a family business: sons growing up in the club house and on the field with their fathers; life-long apprenticeships that stride into professional success until the progeny make their own marks and stake their own claims in the chosen family trade.

There are the Bonds and the Griffeys on the diamond (along with the Alous and the Alomars). The Manning clan on the gridiron, flanked by such supporting players as the Clay Matthews's and the Kellens Winslow.

On the hardwood, there's Joe Bryant and his son Kobe; Henry Bibby and his son Mike; Bill and Luke Walton; and the cagers Barry - father Rick who begat sons Brent and Jon. On the ice, plucky little puckers in the Howe and Hull families grew-up to follow in the slice of their fathers' skate blades. And in professional auto racing, checkered-flag dynasties have included the families Unser, Earnhardt, and Petty.

Meanwhile, the only recollection of ever seeing the son of a great golfer on a tour course in a professional capacity at a big moment is Jack Nicklaus' son, Jackie - caddying for his dad during the historic 1986 Master's win. The images remain: Jackie looking over Jack's shoulder as counsel before a putt...then son embracing dad on eighteen, as iconic a Father's Day moment as it gets.

But that's about it. On the PGA tour, every champion is first generation.

It certainly seems as though it should be otherwise. Of all past times, golf appears as though the sport of legacy and heritage - family club memberships; 18 daily holes of ritual and tutorial; fathers teeing it up for sons; ultimately passing along green jackets from one titlist to another.

You'd even think that at some point some PGA champion's daughter might take after her dad and light it up on the LPGA. - Or an LPGA champion might bear a son who subsequently wins a few majors just like Mom. But no.

Maybe expectations simply become too great in golf and in all that crowded gallery silence the pressure ultimately pulsates and palpitates into slices on the fairway and yips on the green.

On the other hand, maybe it's something more...or something less. Something that's missing. Perhaps there's credence in the notion regarding the requisite killer instinct needed in winning a championship - a shark-eyed quality crucial to conquest. Maybe the kids of professional golfers - maybe they're just too healthy, too loved and too hugged, and have less to prove; maybe they're too well-adjusted to triumph on the big stage.

Maybe in golf, as in nearly all sports, you somehow need to grow up with a chip on your shoulder in order to birdie the chip shot from the bunker and win Dad's jacket on a Sunday afternoo­­n.

Matthew K. Weiland is a Rocky River writer and the founding editor of the Rockport Observer.