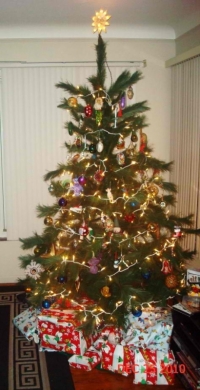 OUR CHRISTMAS TREE TURNED turned 40 this year. It’s artificial, of course. One of those where you insert the branches into designated holes on poles. Each year, it gets more wobbly, loses more needles, is extremely time consuming to assemble and takes up way too much space. But the memories dragging down those fake branches are so real you can almost see them.

My grandparents bought it in 1971, surrendering to the modern age of pre-fab yuletide. Over the years my two brothers, my sister and I enjoyed emptying our second set of stockings (our grandparents spoiled us) on the floor beneath its evergreen plastic fantastic splendor.

Grandma died in February of 1986. That Christmas, Grampa still put up the tree, and every year after that until he passed away in 1992. I, the oldest grandchild, inherited the tree, still in its original box, with all of its lights, the instructions and a handmade sign from Grampa that said “Bought Dec. 1971.” I gave the tree a new home that Christmas, in the living room of my first place on Clifton in Lakewood. In 1996, my husband and I decorated the tree with a lovely collection of new ornaments we got as a wedding shower gift from my great aunt and cousins. Those ornaments are some of the most thoughtful gifts we’ve ever received.

In 2002 we moved to our current home in Fairview Park and enjoyed the tree that Christmas with our
three-year-old. She eagerly “helped” decorate it for the first time, and oops, there went a few glass ornaments. In 2005, our second daughter elbowed her way into our lives and that Christmas she too became captivated by its sparkling beauty.

Though it’s a pain to set up, it’s always gone up, and it’s always been worth the effort. It went up last year, even though I was grieving the loss of my brother who had passed away in February. As my children hung the ornaments, I became keenly aware that some of those ornaments were the very same ones he and I used to hang on our live tree in the living room of our Cleveland Heights home. My father’s Percy Faith Christmas album was our soundtrack; my mother’s Italian Christmas cookies were our reward.

This year my husband and I came to the realization that this was probably the last time we would put up this tree. It had a good run. It’s been a constant in my life for these past 40 years. It’s given me comfort and the magical feeling of being a kid again. I’m grateful I’ve been able to share this tree with my children, who never got to meet my grandparents, but are experiencing endless joy with their own Grampa and Grandma and Oma. Yet the sleekness and simplicity of the trees we’ve seen at Target in Westgate and Home Depot in Westwood Town Center are too tempting to resist. They stand up straight, they come with lights. But what they don’t come with, what they won’t have for years and years, are branches that are sagging from many years of memories, warmth and love.

Aimée J. Jannsohn lives in Fairview Park with her husband and two daughters. She works for The Pilgrim Press and is the author of “20 Life Lessons Learned from Cooking,” which can be found at http://www.amazon.com/Life-Lessons-Learned-Cooking-Better/dp/0829818898/ref=sr_1_2?s=books&ie=UTF8&qid=1323227965&sr=1-2